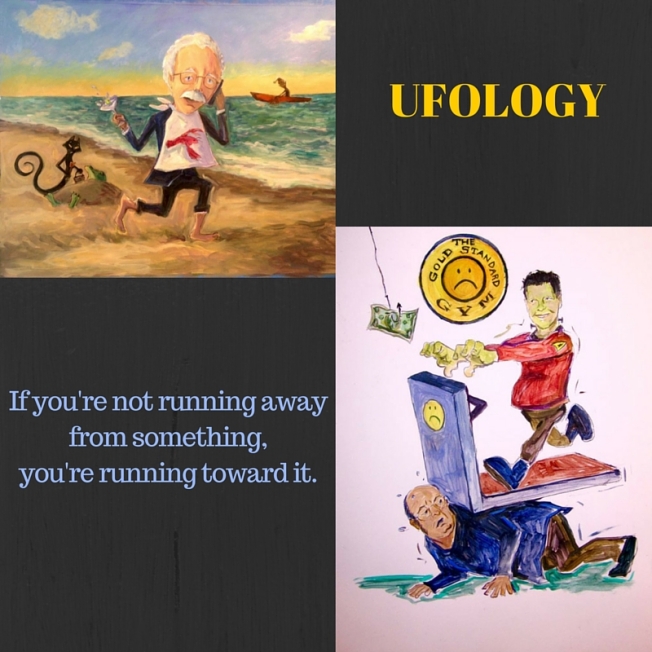 Watching the news package in the above link about a divorce attorney who used hypnosis to sexually abuse female clients got me back to thinking about ufology’s own David Jacobs. Specifically, how he was caught on tape asking a female subject under hypnosis to send him her soiled panties and not remember she had done so. And at another time, offered to buy her a chastity belt with nails at the vaginal opening he found at a sex shop he frequented, to keep away rapey alien/human hybrids. He had convinced her such beings existed in her life through numerous hypnotic sessions conducted after telling her all about them from other subjects he had put under.

When Jeff Ritzmann and I exposed this those many years ago, there was a lot of resistance from within the ufological community. Friends stuck by him, of course, and some podcasting and radio people. UFO conventions hosted him. MUFON gave him a lifetime achievement award. It was an embarrassing wakeup call the likes of which might completely fall on deaf ears today, when we’ve got a president-elect who was caught on tape bragging about grabbing women by the pussy and getting away with it because he’s famous.

From sexism to sycophants to friendship to preservation of a cottage industry that ran on many of the memes culled from alien abduction hypnosis–there was no shortage of reasons for people to turn a blind eye to Jacobs’ unethical behavior. But there was one excuse given–that even Jacobs trumped up a bit–that bothered me in that I couldn’t figure out if it was true or not. It was the notion that a subject under hypnosis is still in control because they are self-aware. If true, then she is allowing this to happen. It’s her dirty secret. This is how people give themselves permission to act out repressions that are taboo.

She wanted it. That old rapey chestnut. And the answer hadn’t come to me until watching the above video package. The answer is this: self-awareness and self-control are two different things. They are so intertwined that it’s easy to forget they can be pulled apart.

Ever take a psychedelic? Scream all you want from the back of your mind–you ain’t snapping out of it on command. Ever have a lucid dream where you think you have full control because you’re aware you are asleep, then find out you don’t? Ever struggle with sleep paralysis where you cannot even in waking consciousness will your own body to move? There are certain spiritual experiences where this is the case as well, such as talking in tongues, spontaneous movements–go down the list. You’re there and not in control. Why would we assume it is otherwise with hypnosis?

Clearly the police officers in that video did not assume it. And neither did the judge. Heck, even the man accused admitted to what he was doing. He didn’t blame the victims because he knew there were several and he wasn’t one of them.

Now apply this to other forms of mesmerism. Like television and dictatorial speeches. Sporting events. Mob mentality. Think how controllable we all are in masses if not individually. Some people most certainly let go their repression and act out in the right circumstances. But most? Not most. To say most is to ignore all of the hard work and dedication our own intelligence community has put into fostering hypnosis as a means of controlling people. (I say with a nod to the work of Jack Brewer.)

We have not and will likely not get legal justice in Ufology Land for all the damage done by numerous amateur hypnotists. What we are left with is ourselves and our responses to unethical behavior. It’s never too late to give up the sacred cows and change our minds with the facts. I’d argue that our response is our responsibility. In this, we are in full control.

One thought on “Hypnosis Used Illegally. This Looks Familiar.”

This many people love me:

Stop Tryin’ To Categorize Me, Man!